Also known as a wood spider

Huntsman spiders, members of the family Sparassidae (formerly Heteropodidae), are known by this name because of their speed and mode of hunting. They are also called giant crab spiders because of their size and appearance. 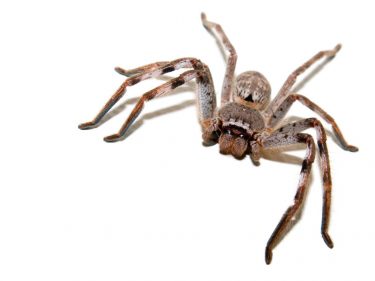 Larger species sometimes are referred to as wood spiders, because of their preference for woody places (forests, mine shafts, woodpiles, wooden shacks). In southern Africa the genus Palystes are known as rain spiders or lizard-eating spiders. Commonly they are confused with baboon spiders from the Mygalomorphae infraorder, which are not closely related.

More than a thousand Sparassidae species occur in most warm temperate to tropical regions of the world, including much of Australasia, Africa, Asia, the Mediterranean Basin, and the Americas.

On their upper surfaces the main colours of huntsman spiders are inconspicuous shades of brown or grey, but many species have undersides more or less aposematically marked in black-and-white, with reddish patches over the mouthparts. Their legs bear fairly prominent spines, but the rest of their bodies are smoothly furry. They tend to live under rocks, bark and similar shelters, but human encounters are commonly in sheds, garages and other infrequently-disturbed places. The banded huntsman (Holconia) is large, grey to brown with striped bands on its legs. The badge huntsman (Neosparassus) is larger still, brown and hairy. The tropical or brown huntsman (Heteropoda) is also large and hairy, with mottled brown, white and black markings. The eyesight of these spiders is not nearly as good as that of the Salticidae (jumping spiders). Nevertheless, their vision is quite sufficient to detect approaching humans or other large animals from some distance.

We’ve been using Regal Pest Control for a year. We started using them because our builder uses them for all his homes. Previously we had used another pest service for about 30 years. Little did we know we’d been receiving “adequate” service for those years. Regal Pest Control does a superior job, I highly recommend their services.

This place does a great job. They answer emails and phones promptly. They come out in between quarterly service. Friendly group of techs.

Great company and the technician was on time even though I wasn’t. Very professional and she answered my questions even though I had her waiting. I recommend Regal Pest Control because they practice excellent service!

Found the company via google and the gentleman was extremely kind and informative. The service was fast and I was informed that if I ever see bugs inside the home they come out for a free service to rid of the critters! Super exciting!

I’ve been using Regal Pest control for about 7 years now. I have had nothing but good experiences. When I have bugs inside between treatments, I make a phone call and they are usually out within 24 hours to respray or address and correct the problem. All their staff has been friendly and professional, and I would definitely recommend to friends and family.

Like many others looking for services I googled termite control and Regal’s name came up. This company was very professional on time willing to work with me on my availability .I highly recommend this company ! Thank you Everyone that helped me there at the Regal office . The technician very professional thank you. He gets 5 stars in my book! He explained everything and answered all my questions thanks again.