Also known as a Palmetto Bug

The Florida woods cockroach or palmetto bug (Eurycotis floridana) is a large cockroach species which typically grows to a length of 30–40 mm (1.2–1.6 in). 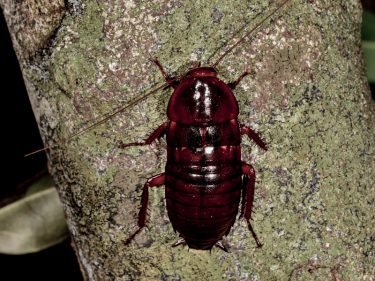 The Florida woods cockroach is slower moving than many other cockroach species. It prefers damp locations with abundant moisture, and does well in warm, damp climates. It is found in its native habitats, such as Florida and the West Indies. The species wanders indoors at times, especially into damp locations, such as bathrooms; however, it prefers the outdoors and is not considered a major pest in the home. It is cold intolerant and requires a warm, subtropical or tropical climate. It can be found in sheltered outdoor locations, such as under leaf litter, in tree holes, and under lumber and boards, and other crevices, as well as in bushes and wooded areas. Often it can be seen on palmetto trees, which gave it one of its early popular names, the palmetto bug. It is not to be confused for the American cockroach (Periplaneta americana), another common Florida insect, that is sometimes also referred to as a palmetto bug.

We currently have a yearly contract with Regal and they come around every few months protecting our investment with their pest control services. Our technician was very personable, polite and clean. I know why the Crown is your logo, you treat every customer like they are kings and we appreciate that. Thank You!

Great staff! Everyone is so pleasant. And they will come out whenever you need them. Excellent pest control service!

Delighted with service today and pleased to have signed contract for service for a year. Dillon was great…thorough, detailed explanation and just so nice. Regal took care of condo cmty. That was a good reference.

Regal Pest Control is a topnotch company! I was so impressed with their level of customer service. Every person I spoke to over the phone was extremely friendly, knowledgeable, and helpful. I had some questions since we have not needed to treat our yard for fleas in many years. I was told Richard, the owner, would get back to me shortly to discuss my questions and concerns and he called me back within 15 minutes. Richard answered all my questions, then asked what my goals were so he could make the best recommendation for me. He was very helpful, gave me options, and did not try to up sell. I felt like I was speaking to a friend who was trying to help me. Richard came up with a plan to address my needs and offered to schedule service the same day! I needed to wait until my next day off and he scheduled me for the first appointment of the day. Tony was my service technician. He arrived right on time, answered my questions, and did a very thorough job. He was also extremely friendly and professional. I am so pleased with Regal and would highly recommend them to anyone in need of the many services they offer!

Great company and the technician was on time even though I wasn’t. Very professional and she answered my questions even though I had her waiting. I recommend Regal Pest Control because they practice excellent service!

John is extremely knowledgeable and always leaves a document of service behind of what he has done. He has “saved our lawn” in the 3 months we have had Regal take over!! His work and experience are worth their weight in golf!!!