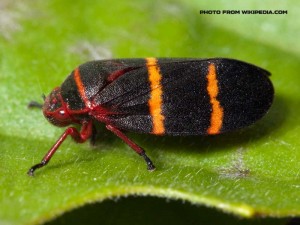 Description: Adults are like leafhoppers but appear much wider, about 3/8 inch long, dark brown to black and have two brilliant red-orange lines traversing the forewings, which are held over the back of the body.  Immatures residing within masses of spittle are but are smaller, wingless, with white, yellow or orange bodies and brown heads and red eyes. There are several other spittlebug species common in Texas.

Life Cycle: Winter is spent in the egg stage that hatches in the spring. Nymphs produce the spittle mass to prevent them from drying out, and develop through four stages within about one month. Eggs hatch in about 2 weeks. Two generations can occur per year.

Habitat and Food Source(s): These spittlebugs feed on many plants, including grasses, ornamental plants, some crops and weeds.  Immatures can be teased out from their frothy spittle masses.  Adults move about readily often in tall weeds or grassy areas.