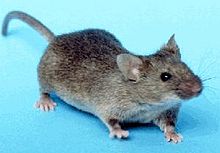 “The house mouse is a small, slender rodent that has a slightly pointed nose; small, black, somewhat protruding eyes; large, sparsely haired ears; and a nearly hairless tail with obvious scale rings. House mice are considered among the most troublesome and economically important rodents in the United States.

Adult house mice weigh about 2/5 to 4/5 ounce (11 to 22 grams). They are generally grayish brown with a gray or buff belly. Similar mice include the white-footed mice and jumping mice (which have a white belly), and harvest mice (which have grooved upper incisor teeth). For more details on species identification, see a field guide such as that by Burt and Grossenheider (1976).

Native to central Asia, this species arrived in North America with settlers from Europe and from other points of origin. A very adaptable species, the house mouse often lives in close association with humans and therefore is termed one of the “commensal” rodents along with Norway and roof rats. House mice are much more common in residences and commercial structures than are rats. Brooks (1973) regards them to be the most common mammal in cities, next to humans.”

“Following their arrival on colonists’ ships, house mice spread across North America and are now found in every state, including coastal areas of Alaska, and in the southern parts of Canada.”

“House mice live in and around homes, farms, commercial establishments, and in open fields and agricultural lands. At times they may be found living far from human settlements, particularly where climates are moderate. The onset of cold weather each fall in temperate regions may cause mice to move into structures in search of shelter and food.”

“House mice eat many types of food but prefer seeds and grain. They are not hesitant to eat new foods and are considered “nibblers,” sampling many kinds of items that may exist in their environment. Foods high in fat, protein, or sugar may be preferred even when grain and seed are present. Such items include bacon, chocolate candies, butter, and nutmeats.

Unlike Norway and roof rats, house mice can survive with little or no free water, although they readily drink water when it is available. They obtain their water from the food they eat. An absence of liquid water or food of adequate moisture content in their environment may reduce their breeding potential.”

“House mice are mainly nocturnal, although at some locations considerable daytime activity may be seen. Seeing mice during daylight hours does not necessarily mean that a high population is present, although this is usually true for rats.

Mice have poor eyesight, relying on their hearing and their excellent senses of smell, taste, and touch. They are considered color-blind; therefore, for safety reasons, baits can be dyed distinctive colors without causing avoidance by mice, as long as the dye does not have an objectionable taste or odor.

House mice may burrow into the ground in fields or around structures when other shelter is not readily available. Nesting may occur in the ground or in any sheltered location. Nests are constructed of shredded fibrous materials such as paper, burlap, or other similar items, and generally have the appearance of a “ball” of material loosely woven together. They are usually 4 to 6 inches (10.2 to 15.2 cm) in diameter.

Litters of 5 or 6 young are born 19 to 21 days after mating, although females that conceive while still nursing may have a slightly longer gestation period. Mice are born hairless and with their eyes closed. They grow rapidly, and after 2 weeks they are covered with hair and their eyes and ears are open. They begin to make short excursions from the nest and eat solid food at 3 weeks. Weaning soon follows, and mice are sexually mature at 6 to 10 weeks of age.

Mice may breed year-round, but when living outdoors, they breed mostly in spring and fall. A female may have 5 to 10 litters per year. Mouse populations can therefore grow rapidly under good conditions, although breeding and survival of young decline markedly when population densities become high.

House mice have physical capabilities that enable them to gain entry to structures by gnawing, climbing, jumping, and swimming.

Studies indicate that during its daily activities, a mouse normally travels an area averaging 10 to 30 feet (3 m to 9 m) in diameter. Mice seldom travel farther than this to obtain food or water. Because of their limited movement and feeding behavior, both of which differ from those of commensal rats, they are much more difficult to control in some situations.

Mice constantly explore and learn about their environment, memorizing the locations of pathways, obstacles, food and water, shelter, and other elements in their domain. They quickly detect new objects in their environment but, unlike rats, do not fear them. Thus, they will almost immediately enter bait stations and sample new foods (baits). The degree to which mice consume a particular food depends on the flavor of the food in addition to its physiological effect. Mice may reject baits simply because they do not taste as good as other available foods.

If the bait contains poison or some other substance that produces an ill effect (but not death) within a few hours, the bait will often become associated with the illness. Bait shyness can persist for weeks or months and may be transferred to nontoxic foods of similar types. Prebaiting, that is, training mice to feed repeatedly on nontoxic bait for a period of days prior to applying the toxicant in the bait, will largely prevent sublethal doses and thus bait shyness. It will also reduce the number of mice left to be bait shy. Prebaiting is especially recommended with zinc phosphide baits. All of the other toxic baits currently registered for house mice are chronic or slow-acting. Because of this slow action, the mice’s subsequent illness is not associated with the bait even if a sublethal dose is consumed; thus, bait shyness does not usually occur. These baits, in effect, serve as their own prebait.”

This information is taken from the Internet Center for Wildlife Damage Management – http://icwdm.org/handbook/rodents/HouseMice.asp